Using AWS IoT Console to manage IoT devices. In MQTT sample, we need to create a thing in console and setup policy, certificate, and keys.

Devices connected to AWS IoT are represented by things in the AWS IoT registry. A thing represents a specific device or logical entity. It can be a physical device or sensor (for example, a light bulb or a switch on the wall). It can also be a logical entity, like an instance of an application or physical entity that does not connect to AWS IoT, but is related to other devices that do (for example, a car that has engine sensors or a control panel). (From Amazon docs)

In AWS IoT Console, go to Manage->Things to create a thing. After that, in things details page Interact tab we can find the API endpoint for IoT device.

In AWS IoT Console, go to Secure->Certificates to create a certificate(One-click certificate creation are recommended):

Then we need to download certificate, keys and root CA from this page: 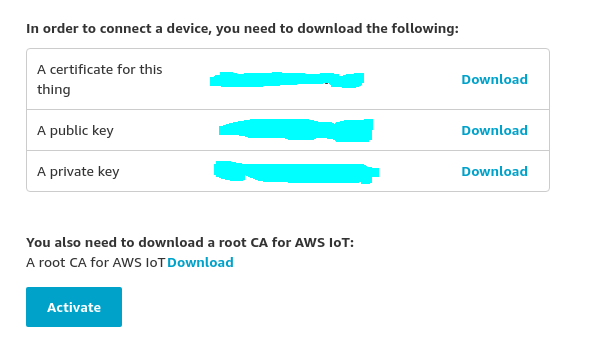 AWS IoT SDK is the SDK for connecting to AWS IoT from a device using embedded C. Before porting to embedded platform, we can have a quick trial on a Linux based PC.

This SDK depends on MbedTLS. Files of MbedTLS need to copy to aws-iot-device-sdk-embedded-C/external_libs/mbedTLS/.

MQTT sample code is under aws-iot-device-sdk-embedded-C/samples/linux/subscribe_publish_sample/. Before building, we need to do some modifications to make it work.